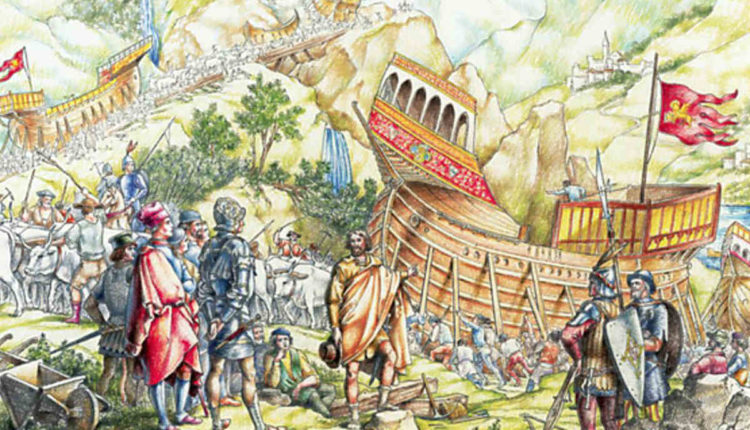 It was an incredible feat built between 1438 and 1439 by the Venetian Republic which saw 2 galleys and other boats brought from the Venetian lagoon to Lake Garda to help Brescia's ally after the Visconti invasion.

The convoy consisted of 25 large ships, 2 galleys and 6 frigates and cost the Serenissima Republic 15,000 ducats. The enterprise saw the involvement of hundreds of men and about 2,000 oxen. The weight of a single galley was 250 pieces. Verona was the protagonist of the trip.

The Venetians went up into the Adige river and brought a land the boats to Mori to transfer them on trunks through the valley to Loppio going up to the San Giovanni pass.

From here they went down to the town of Nago and then, along the narrow valley of Santa Lucia, they arrived in Torbole where the boats were armed to face the battle on Lake Garda.

As the sources of the period taken from Beggiato cite, the Adige in the city was dry and it was necessary to build "floats" to continue sailing north. The volume - published by Editrice Veneta of Vicenza - narrates the historical context and the company is reconstructed on the basis of what was reported by historians of the time.