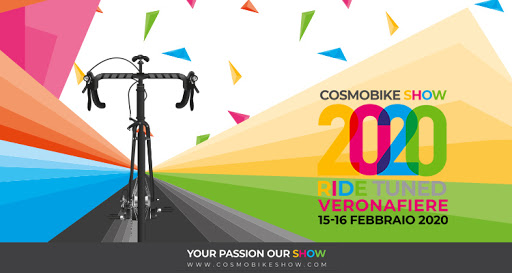 CosmoBike Show 2020, the Bike Festival that opens the 2020 cycling season, returns to Veronafiere from 15th to 16th February.

Acrobatic performances, meetings with champions and test rides on circuits are waiting for fans in Verona, together with the big players, their latest models and the most cutting-edge technologies.

The success of the new CosmoBike SHOW consumer format has been confirmed by both companies and the general public. In fact, we are proud to be able to present the numbers reached in the last edition: 32,000 visitors, 183 companies and brands present, over 40 talks in two days and 2,500 test bikes on the test track.

A large Bike Park will also be built inside the fairground to test all the MTB-XC 2020 models, muscular and electric: a dynamic track, with a series of technical obstacles and parabolic sequences that will be completely indoor, in hall 10, and usable by all visitors, free of charge.

CosmoBike Show 2020 not only focuses on the world of on and off-road racing but dedicates two initiatives aimed at riding tourism: the CosmoBike Tourism area, with the best proposals and equipment for fans of this "slow" holiday form; and the Italian Green Road Award - the Oscar of the best cycle paths in Italy - with which it rewards the most suggestive regional routes.

The 2020 edition has confirmed the partnership with La Gazzetta dello Sport, which will continue the path taken during the last edition: the story of a totally new format, with over 40 events and talk shows and lived together with the great champions of the past and present .

CosmoBike Show 2020 has also developed a series of initiatives aimed at supporting dealers by optimizing their presence on the days of the event. In addition to free admission, on Sunday 16 February CosmoBike Show will organize 2-hour free refresher courses for operators in the sector, on Marketing and Social Media Management issues, in particular on the use of social media such as Facebook and Instagram.

Finally, Cosmobike will also be fun: during the two days of the Festival you can watch the breathtaking spectacle of the athletes of The Recless Bike Show.

This year too Cosmobike Show will offer the opportunity to meet the great cycling champions in all specialties: we have already given news of the presence of the Scottish performer Danny MacAskill, but there will also be Marco Aurelio Fontana, rider with an infinite prize list as well Focus e-mtb ambassador, who will be present at the Focus stand for a meet & greet. The appointment is for Sunday 16th February.